The Azerbaijani Laundromat money laundering scandal came to light in 2017, but much of it still remains a mystery. Here’s the full story. 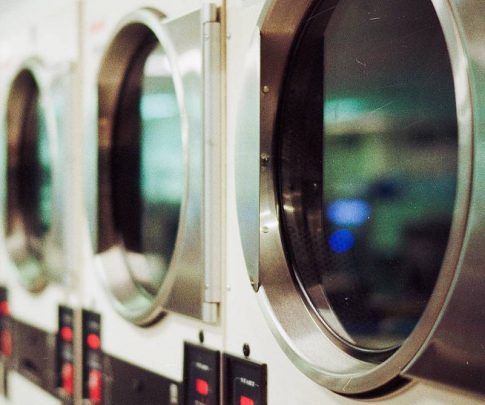 Azerbaijan is a small country located at the crossroads between Eastern Europe and Western Asia. The former Soviet bloc country gained independence in 1991, however it has faced a number of struggles since then. From wars to human rights violations, oil rich Azerbaijan has a troubled history. In 2017, financial crimes were added to the list.

The Azerbaijani ruling elite were accused of laundering nearly $3 billion in a case that came to be known as the Azerbaijani Laundromat. Get ready for a wild story full of bribery, shell companies, shady officials, and human rights violations.

To understand how the Azerbaijani Laundromat worked, we have to look at the Danske Bank money laundering scandal as well. In 2007, Danske Bank took over Sampo Bank and by doing so, gained their one and only branch in Estonia. From the start, there were multiple warning signs that things were not as they should be.

Large numbers of non-residents (mostly from Russia and former Soviet countries) were moving money through the Estonian branch. This should have been a massive red flag, however, the Estonian branch did not have the same anti-money laundering (AML) procedures in place as the branches in Denmark.

Despite the warning, and a persistent whistleblower, the scandal wasn’t revealed until 2017 by the Danish newspaper Berlingske. In total, $2.9 billion was laundered through the Estonian branch, making it the largest money laundering scandal in Europe to date.

So how does this tie into the Azerbaijani Laundromat?  Cash was being funneled out of Azerbaijan into four different shell companies registered in the United Kingdom. Two were in Scotland and were Scottish limited partnerships (SLPs) which meant that ultimate beneficial ownership did not have to be divulged.

The money landing in these fake companies was going through multiple stages to cover up its origins, but they all had one thing in common. Danske Bank had processed payments from it’s Estonian branch to all four UK companies between 2012 and 2014. While Danske Bank has had to answer for its crimes, so far the Azerbaijani government has not.

The Money – coming and going

The origins of the $2.9 billion in this case is quite murky. Those behind the scheme worked extremely hard to hide where the money originated from. Some of the money came from Azerbaijan’s ruling elite – three government officials chipped in $9 million. Another $29 million came from Russian weapons export company Rosoboronexport.

But the largest contributor of all came from an account held by a mysterious company at the International Bank of Azerbaijan (IBA). A total of $1.4 billion originated from this account; half of the total funds. The company went by the name Baktelekom MMC, however, the company doesn’t exist outside of this bank account. There is no website and no commercial activity. The name of Baktelekom closely imitates that of a legitimate company, Baktelecom, with only one letter differing, and for that reason appears to be designed to confuse people.

While Baktelekom appears to have made no money itself, the funds were certainly coming from somewhere. All signs point to Baktelekom being owned by those with ties to Azerbaijan’s ruling class. There has been speculation that Baktelekom’s funds came from IBA loans, and the bank has its own extremely problematic history.

The other major contributors are shell companies “owned” by citizens of the country posing as owners to further hide where the money actually originated from. While all signs point to Azerbaijan’s ruling elite being the true owners of the funds, there isn’t enough evidence to definitively prove that they are.

Before we dive into how the money was distributed, it’s important to understand Azerbaijan’s government regime. Azerbaijan has a very bad track record when it comes to human rights, especially regarding freedom of speech and the press. The Human Rights Watch has condemned the country’s government many times for activities such as arresting journalists without just cause, illegal abductions, silencing the opposition, torture, and corruption.

However, despite Azerbaijan being a cesspool for criminal activity sanctioned by the government, the country is rich in oil. Many countries and organizations, including the European Union, choose to maintain relations with the problematic country for this reason. However, it is important to note that the EU Parliament has repeatedly decided to not make a deal with the country until their human rights record is vastly improved.

The Beneficiaries – dollars for propaganda

The main use of the funds was for lobbying on behalf of the government of Azerbaijan. Essentially, they wanted to hide all of their problems by paying people off. Several members of the Council of Europe’s parliamentary assembly (PACE) were given money from the Azerbaijani government to vote a certain way.

There is a pretty long list of who was paid off by Azerbaijan (and an even longer list of who was approached for bribes) including government officials, business people, and even a journalist or two. Former Italian deputy of PACE Luca Volontè was accused of accepting money and attempted to undermine a report on political prisoners in Azerbaijan. He is said to have received €2.39 million in bribes and is being investigated by the Italian police.

Another is German MP Karin Strenz who had a reputation of defending Azerbaijan despite their atrocious human rights record. She only received a small amount of money, but was fined €20,000 by the German authorities in early 2019 and was removed from PACE. However, she is still a part of German parliament.

In total, 17 present and former members of PACE were found to have accepted money from the Azerbaijani Laundromat and were banned as a result.

In total, more than $2.9 billion was paid out to companies and many of them had no idea where the money actually originated from. Some of the money also went towards luxury services such as private school tuition, luxury cars, deposits for upscale flats in London, and designer clothes. Much of the money was spent in the United Kingdom.

The first deputy prime minister of Azerbaijan, Yaqub Eyyubov, and two of his sons, used some of the money to pay for medical services in the United States and Europe. During the same time frame, one of the sons also received an influx of millions into his bank account from the Azerbaijani Laundromat. The press secretary to President Aliyev also received payments from the laundromat as well.

The Punishment – or lack thereof

Part of the problem is that there is no authority in Azerbaijan that will prosecute the ruling elite. They are either corrupt themselves or live in fear of being jailed for no reason. The lack of free speech and free press have greatly affected this case and its outcome. While some journalists in the country have continued to investigate, they face immense difficulties while doing so.

Justice has been largely evaded, in part thanks to the lack of clarity surrounding the origins of the funds and the Azerbaijani government itself. We can only hope that more details emerge with time, and that Azerbaijan experiences a regime change which reveals all of the details.

Either way, there was a severe lack of anti-money laundering and Know Your Customer (KYC) procedures at Danske Bank. From the little we know of IBA, it’s safe to assume that they are facing many of the same problems as well. When you consider that $2.9 billion was moved out of the country over the course of two years, many red flags should have been raised. If you do the math, almost $4 million was being funneled out of Azerbaijan per day. A truly astonishing number.

Unlike most of the other money laundering cases we’ve covered on the blog, the case of the Azerbaijani Laundromat lacks a satisfactory ending. Hardly anyone has been punished, and it doesn’t look like anyone else will be anytime soon.

The most baffling part is the lack of prosecution of the European officials who accepted bribes from the Azerbaijani Laundromat. Many of them are still serving in their country’s parliament, and still belong to their respective political parties. Perhaps it is because the origins of the funds are too hard to trace and there isn’t enough evidence. Or maybe it’s because European officials are eager to overlook Azerbaijan’s many issues in favor of the oil the country offers.

The Azerbaijani Laundromat no longer appears to be running, in large part probably thanks to the Danske Bank scandal. The case also draws many parallels to the Russian Laundromat, a global money laundering scandal which we will be writing about soon. We can only hope that justice will eventually prevail, and that banks all over the world have learned an important lesson.