Today we’re very lucky to bring you an interview with Henning Franken. Henning is a distinguished lawyer with an impressive resume spanning over 15 years. 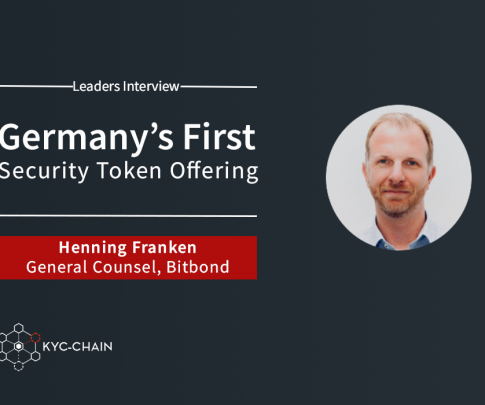 Since January 2018, Henning has worked as the General Counsel at Bitbond and successfully submitted a security prospectus to the German regulator. As soon as the regulator gave the green light, Bitbond launched the first German Security Token Offering with an approved prospectus.

In this interview we discuss how KYC-Chain is helping Bitbond meet strict compliance standards, and learn how the STO has been doing.

1) Hello Henning, thank you very much for taking the time to talk to us — in what must be a very busy time. Could you start by introducing yourself?

The pleasure is all mine.

My name is Henning Franken and I’m the General Counsel at Bitbond. Bitbond is a global SME lender and we’ve just launched the first German STO with an approved security prospectus.

Before this I worked for a number of law firms and companies including Fab.com — which was valued at close to $1 billion. The company went through rapid growth during my time there, making it a very memorable experience.

2) Could you explain what Bitbond does and what the STO is about?

Sure, Bitbond is a Germany-based SME lender that was established in 2013 and has since serviced over 3,000 borrowers with a total loan volume north of €13 million.

The Bitbond STO is the first of its kind in Germany, not only because of the approved prospectus but also because it tokenizes a bond under German and EU civil law. Essentially, we’re offering a security token which generates returns for investors on a quarterly and annual basis. We’re aiming for a fixed annual coupon of 4% per year and a 60% pre-tax profit share — bringing the estimated target return to about 8% per year.

The money that we raise in the STO will primarily be used to fund business owners from around the world. That way, investors not only enjoy great returns but also have the satisfaction of supporting entrepreneurs who might live in underbanked regions of the world.

3) Could you explain what the Security Prospectus is and why it’s important?

Sure, the concept of a prospectus comes from the traditional trade of securities and other financial instruments or Initial Public Offerings.

Businesses that want to publicly offer such instruments are — in short -required to produce an official document which provides extensive details about the investment opportunity, including:

This document is then circulated to investors who analyze it before making an investment decision. It allows investors to do their due diligence, and to explain not just the upside but also the business model of the issuer and risks involved.

After many conversations with the German regulator, it became clear that STOs would be treated very similarly to bonds in this regard. As Bitbond was already a licensed financial platform, we needed to submit our own prospectus in order to go ahead with our Security Token Offering. You can find the public version , as well as a condensed version on the website.

4) How long did it take to get the Security Prospectus approved and what were the main challenges?

As you can imagine, getting the prospectus approved was not a quick task. The German regulator is very responsive but also very diligent, so we had to go through many different edits. Overall though, I was very impressed with their willingness to engage with our Security Token Offering.

Of course, we had been in continuous communication with them for many years before we even thought of the STO, because we had been awarded our license as an asset broker in 2016. This clearly helped our cause, as we had a solid track record and could prove that we were dedicated to compliance. Our partnership with KYC-Chain and SelfKey is more proof of that.

To answer your question: I would say that getting the prospectus ready for submission took close to a year, while the actual approval and editing process took closer to three months. I think now that there is a precedent in Germany, the prospectus could possibly be written and approved much quicker however.

5) What would you recommend to CEOs and others who are planning a token offering?

From a legal perspective it’s clear that token offerings are under much more scrutiny today than they were a year ago. You need to be as transparent as possible and take compliance extremely seriously.

Start talking to the regulators early and try to gauge their receptiveness to your project. One key consideration is the type of token you plan to issue.

Utility and security tokens have very different implications from a legal perspective, and harbour unique risks. If you do plan to launch a utility token, you have to be 100% sure that you can strongly defend that decision.

In the US, we’ve seen multiple platforms being penalized for selling a utility token that was later classified as a security token. This can typically include a fine of up to $250,000 as well as the return of all the raised funds.

Finally, make sure that you can allocate a significant amount of resources to your token offering. Nowadays, an ICO or and STO can easily cost $500,000, and should not be taken lightly.

6) What’s been the biggest challenge for the Bitbond STO so far?

I think the biggest challenge is to raise awareness and capture it for a significant period of time. The blockchain space is so innovative that things change every day.

Just recently Societe Generale, one of the world’s biggest banks, announced a project to tokenize $112 million in bonds. That’s obviously going to capture the headlines, and there is little you can do about it.

7) How has the partnership with KYC-Chain helped you?

As mentioned previously, compliance is absolutely key for the success of our STO and KYC-Chain has provided a lot of guidance on this matter. Due to their extensive experience in the crypto space, they’ve provided great advice and really helped us navigate these new waters.

That’s all for today. Thank you so much for taking the time to talk to us Henning.

Interested readers can check out the Bitbond STO here, and book a DEMO for KYC-Chain’s compliance software here. Thank you all for reading.